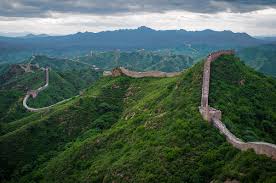 Peking University & World Bank co-sponsor 2018 International Summer School on Education (北大教育财政所与世界银行共同主办2018年“教育与发展”国际暑期学校) to explore ways to improve the quality of education and equity in education, and share experiences of China’s education development and innovation with other countries.  On August 26-31, 2018, Peking University’s China Institute of Educational Finance Research (CIEFR) and the World Bank organized the 2018 Education and Development International Summer School in Beijing, China. 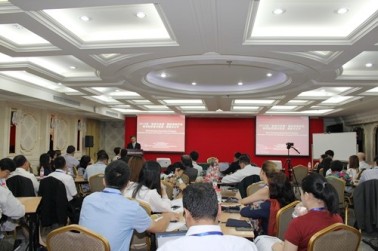 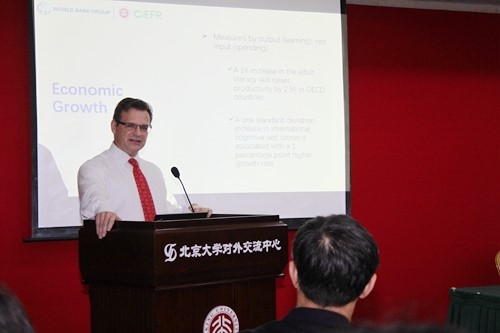 Harry Patrinos (World Bank) provided an overview of the issue of education and development on a global scale. In recent years, education development has been given more attention by countries all over the world. Investment in education worldwide has increased from $2 trillion in 1999 to $6.3 trillion in 2018. Investment in education has brought huge returns to both individuals and countries. However, education development still faces major challenges. For example, there are still 264 million people who have not yet received education, 262 million people who are unable to read, and one in four young people cannot read. At the same time, education needs to cope with the information society and the challenges that come with it. Educational challenges on a global scale indicate that countries are in urgent need of reform. Harry Patrinos also introduced human capital policies in countries such as the United States, Finland, Poland, Hong Kong (China), Thailand and Jordan. 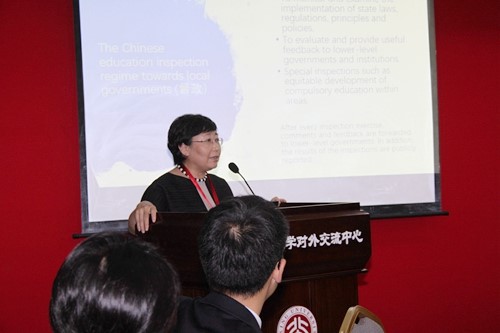 Professor Wang Rong (Director, CIEFR) gave a speech entitled Improving Education Quality and Equity: China’s Policies and Practices, focusing on the basic systems of Chinese education and the need to improve the quality of education. Effective policies and paths to change and promote educational equity. Wang Rong pointed out that China’s education development can be roughly divided into three stages: the focus of the first stage is to achieve the popularization of compulsory education; the second stage focuses on narrowing the urban-rural gap and regional differences in education development mainly through education fiscal policy; At present, China’s education development has entered a third stage of paying more attention to the quality of education and the educational process. 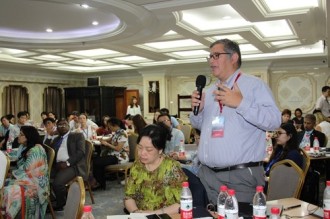 On the last day the course merged with the World Bank China-Africa Vocational Education Cooperation Seminar which included 45 students from 9 African countries.

All the presentations are available here.

Long-Term Impacts of Alternative Approaches to Increase Schooling: Evidence from a Scholarship Program in Cambodia  This paper reports on a randomized experiment to investigate the long-term effects of a primary school scholarship program in rural Cambodia. In 2008, fourth-grade students in 207 randomly assigned schools (103 treatment, 104 control) received scholarships based on the students’ academic performance in math and language or their level of poverty. Three years after the program’s inception, an evaluation showed that both types of scholarship recipients had more schooling than nonrecipients; however, only merit-based scholarships led to improvements in cognitive skills. This new study reports impacts, nine years after program inception, on the educational attainment, cognitive skills, socioemotional outcomes, socioeconomic status and well-being, and labor market outcomes of individuals who are, on average, 21 years old. The results show that both types of scholarships led to higher long-term educational attainment (about 0.21-0.29 grade level), but only merit-based scholarships led to improvements in cognitive skills (0.11 standard deviation), greater self-reported well-being (0.18 standard deviation), and employment probability (3.4 percentage points). Neither type of scholarship increased socioemotional skills. The results also suggest that there are labeling effects: the impacts of the scholarship types differ even for individuals with similar characteristics. (See also: Scholarship induced additional education impacts child’s long-term performance)

Central Asia: Investing today for a brighter future tomorrow Education is a vitally important asset for young people in Central Asian countries, given that hundreds of thousands of labor migrants from these countries have to earn their living abroad — often doing low-skilled work. We are publishing this article written by Lilia Burunciuc, World Bank Regional Director for Central Asia: A young man sitting next to me on a recent flight from Almaty to Dushanbe told me, “I regret that I did not get a better education. I could have had a better job.” He is one of many Central Asian labor migrants doing low-skilled work in neighboring countries. He continued, “I’m telling my brothers and sisters to study hard if they want to have a better life.” It was an important reminder about the responsibility we have as a society to ensure that young people like him get the education they deserve. In light of the technological revolution we are witnessing today, the promise of education is becoming even more important…

Copying Allowed: What other countries can learn from Singapore’s schools

Teacher Professional Development around the World: The Gap between Evidence and Practice

Returns to Investment in Education database online and can be found here.