Today, the Organisation for Economic Co-operation and Development (OECD) released results from the Programme for International Student Assessment (PISA). PISA is a triennial international survey which aims to evaluate education systems worldwide by testing the skills and knowledge of 15-year-old students. In 2015, over half a million students in 72 countries and economies were assessed in science, mathematics and reading.

Just as in the recently released TIMSS results, Singapore led the world in every subject, outperforming other economies and countries by a significant margin, with mean scores of 556, 564 and 535 in science, math and reading.

Vietnam continues to perform very well, especially in science, managing to enter the top 10, just below Canada and above Hong Kong and the four Chinese provinces and cities (Beijing, Shanghai, Jiangsu and Guangdong).

Since the first round in 2000, no country has improved more than Peru: 64 points in science, 95 in math and 71 in reading. Between 2000 and 2012, the following countries have recorded the highest increase in science scores:

Since the last round of PISA, in 2012, these countries witnessed the biggest improvements:

Kazakhstan and Malaysia improved significantly as well – in science 31 and 23 points, in math 28 and 25 points, in reading 34 and 33 points. But their scores come with footnotes since “overage is too small to ensure comparability,” according to the OECD. Nevertheless, these gains are impressive in such a short time, not only in Kazakhstan and Malaysia, but also in Albania, Colombia, Peru, Slovenia, Qatar and Uruguay. Overall the biggest improvements occurred in Qatar, Albania and Peru: 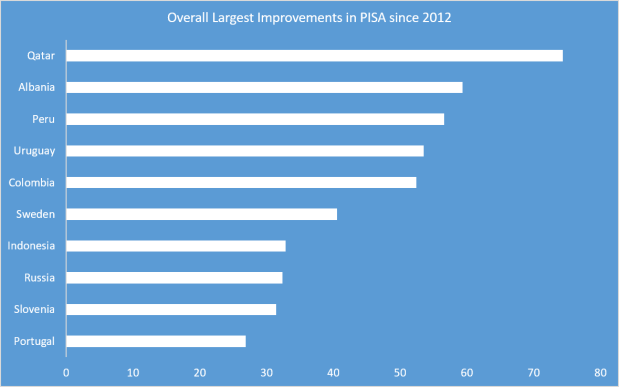 These are impressive gains and testimony to the great efforts that teachers, students and parents put into learning every day. They are also inspiring because they show that improvement happens in rich and poor countries, throughout the world. This is true for the PISA results presented here today and for the TIMSS 2015 results released late November.

The rich data that underlies these indicators will allow policy makers and researchers to analyze education systems. A lot can be learned, but it must be through rigorous analysis of the data. As Henry Levin put it, PISA is “not a statistical study that isolates cause and effect.” But modeling and hypothesis testing can help show causal effects, as was done with Poland’s PISA data.